Humpty Dumpty had a great …influence

The hours of my childhood that were not spent outdoors playing sports, attending family events or tormenting my little sister were often spent alone in my room with the latest issue of a magazine that I enjoyed, so much so that I often kept it hidden from my brothers under my mattress or in a brown grocery bag in my closest. I learned much from this magazine and the final page of each issue would lead to a degree of withdrawal until the next arrived. 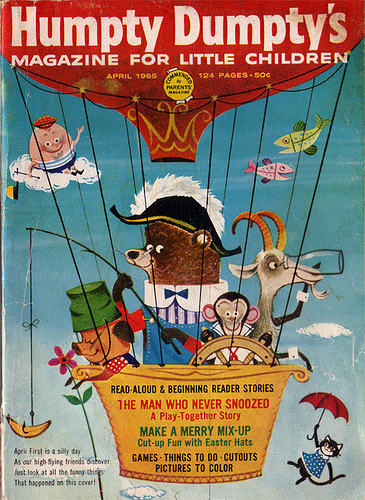 I credit my entrepreneurial spirit to the articles, comics, games and puzzles that appeared in Humpty Dumpty Magazine each month.  The mid sixties didn’t provide youngsters with the type of educational television programming that grew out of Sesame Street and The Children’s Television Workshop beginning late in 1969.

Humpty Dumpty provided me with mind puzzles, numerical tricks, and ongoing stories with characters that I could relate to.  It was a time where I indulged in learning at my own pace and in my own time.  I was never much for structure, and in many ways, I am still not.

My grandparents provided me with the initial subscription, however, the following year I received hockey equipment and the unfortunate news that Humpty Dumpty would not be arriving monthly.

Well, that just wouldn’t do. It was then I learned the lesson that seems to be lost on the youth of today.  The only way to get it was to pay for it myself.  That meant earning the money.  That meant getting a job. My first paper route. Delivery, collection of weekly fees and remittance to the circulation department. I even opened my own chequeing account. My work, my way.  Customer service at its finest. At 9 years of age my motto was: “Rain nor sleet, nor snow nor sun, I deliver my papers to make lots of money.”

If I had only known how the networking I did then would serve me so well today in terms of professional speaking and facilitation.  Times change, the media is different, and perhaps the lessons I learned may take too much time for future entrepreneurs  but when I see a child with a book in their hands, or watching “Conjunction Junction” on DVD it harkens me back to my first “sales” job.