President of The Marketing PAD, a full-service marketing and communications company.;
by Stephen Rhodes | October 7, 2015 · 3:08 am

Who is your customer?

I am surprised at times, about how little some business owners know about their customers.

Some they can actually name, but they aren’t sure why they buy. Some are regulars but little else is known about their buying habits. Some visit out of habit or convenience because that’s more important than 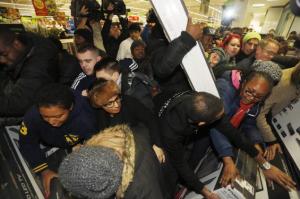 Imagine if we could sort them all into neat little piles. All those who come here for service to the left. If you are here because of price, head to the right. Quality? Follow me.

Recession or not? Who to believe (2)

Yesterday I talked about the divergent views around whether or not Canada`s economy is in recession.

It`s made worse by campaign theatrics around who can better manager the economy, like anyone has control over the price of oil.

Consumer spending is up, employment is up. Energy sector is having a rough time.

The concern is that all this political rhetoric can have a significant impact on small business in what for many should be the best quarter of the year.

I spent 30 years in the newspaper business and weathered two recessions in that time. The first indicators of an economic downturn in both cases came in the automotive and real estate sectors. Both were major advertisers and both cut their advertising budgets by significant amounts.

The Globe and Mail reported Tuesday – ` Excluding the oil, gas and mining sectors, the economy actually grew in the second quarter, thanks to higher consumer spending on the strength of the housing market as well as a modest jump in exports, led by the automotive and energy sectors.`

So, let`s take the optimistic view for the sake of small business in this country.

Make no mistake. We are open for business.

Recession or not? Who to believe

Are we in a recession and how do you know? Unless you are employed by the oil and gas industry either directly or indirectly, it’s hard to tell.

Canada’s economy shrank for the second straight quarter, the weakest six-month period for growth since the Great Recession, sending the country into a technical recession even as strong growth in June suggest the pain may be short lived.

While two consecutive quarters of economic decline qualify as technical recession, both trade and employment numbers have shown positive signs this year, suggesting much of the downturn has been confined to investment in the energy sector.

“If this period is ultimately deemed to be a recession, it will be of the mildest variety and one of the strangest recessions ever,” wrote Bank of Montreal chief economist Douglas Porter in a research note. “Consumer spending was up in both quarters and so too was employment, far from a widespread softening in the economy.”

So, forget the political rhetoric on the campaign trail.

Do you have problems in your business?

Every business has problems. Half the battle is acknowledging that something is wrong. The other half is figuring out what it is and to do about it.

Acknowledging involves some type of analysis, measurement for sure. If you don’t measure you are unlikely to figure it out. So, if customer service is bad, talk to your customers. If sales are dropping look at your sales team or what your competitors are doing. Are your priced right? Do you have good relationships with your customers? Is after sales service good? You can’t fix the problem if you don’t understand it.

Once you understand the problem you need to figure out if you have the smarts (experience) to fix it. If you do, then get on with it.  If not ask for help with someone who has the expertise.

Grandma and grandpa are just starting to figure it out. There is more to social networking than an outlet for teenage angst.

Moreover, half (47%) of internet users ages 50-64 and one in four (26%) users age 65 and older now use social networking sites. The growth rate has doubled over a similar study done a year earlier.

Young people still dominate social networks like Facebook and LinkedIn but social networking use among users ages 18-29 grew by only 13% to 86%. 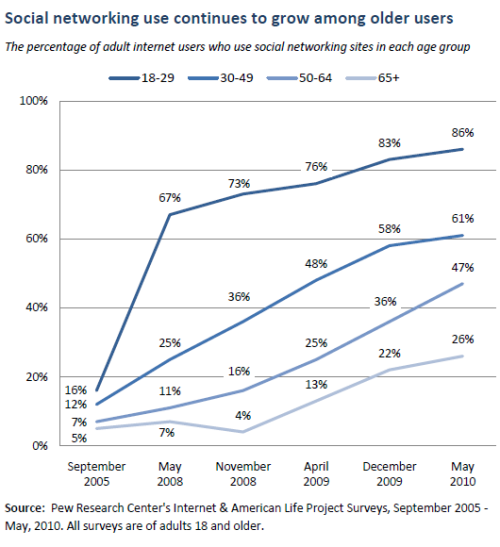 Email is still the primary tool older users stay in touch with friends, families and colleagues, but many older users now rely on social network platforms to help manage their daily communications, the report says.

At the same time, Twitter use has also grown—particularly among those ages 50-64. One in ten internet users ages 50 and older now say they use Twitter or another service to share updates about themselves or see updates about others.

What it means is the same people who pooh-poohed these social networking sites as teenage tracking services are now embracing them in ever increasing numbers.

And, it opens up new markets for business looking to reach these wealthy Babyboomers.